Not all lifts are born equal

Let’s return to the same example as for the previous section about “CRM tools”. Let’s assume that you want to do a direct-mail marketing campaign for one of your product. You must find all the customers that are susceptible to buy your product and send them a brochure or leaflet (this is a classical “propensity to buy” setting but the same reasoning applies to any other settings: cross-selling, upselling, probability of default, etc.).

In technical term, your “Target people” are the “buyers”.

Please Note that this first model is making some errors (in total there are 4 errors): i.e. there are three

that are classified as

that is classified as a

These errors are pointed in the illustration below:

Let’s now have a look at a second model (model 2) illustrated below:

This last model looks better because it’s making absolutely no error on the “learning/creation dataset” (the lift of the learning dataset will be 100% accurate).

Let’s now use these two models on an unknown, new dataset (a new population), classically named the “TEST dataset” (since it’s a new, unseen population the position of the

We can see that, when we apply the two models on the “test dataset”, the first model is really better: it makes no errors. In opposition, the second model makes 9 errors.

The phenomenon illustrated above is the following: When we are constructing a model that makes no mistakes on the “training dataset”, we obtain a model that does NOT perform well on unseen data. The “generalization ability” of our model is poor. The predictive model is using some information there were in reality noises. This phenomenon is named “Over-fitting”: we are using some information out of the “learning dataset” but we shouldn’t. We are learning the noise contained inside the “learning dataset”.

In the example above, we will say that the “Model 2” “overfits” the data and, thus, it can’t be used. “Model 1” does not overfit the data and can be used.

A model that “overfits” the data can have an accuracy of 100% when applied on the learning set.

You must avoid using “over-fitted” models. You can recognize them easily: they have a very good accuracy on the “learning/creation dataset” and have a very inferior accuracy on the “Test Dataset”. For example, in the chart below, there are 5 different predictive models. Each one of the 5 predictive models has been applied on its own “learning dataset” (curves in Red) and also on a separate “test dataset” (curves in Blue) , to create in total 10 (=5×2) different lifts. These 10 lifts are illustrated here: 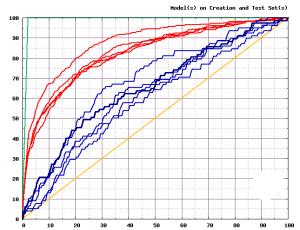 The accuracy of these 5 models is completely different between the creation dataset and the TEST dataset. Thus, these 5 models are all “overfitting the data” and they can’t be used.

To compare the accuracy of 2 predictive models: look only at the lift curves computed on the TEST dataset.

About the over-fitting phenomenon: