Not all predictive analytics tools are born equal 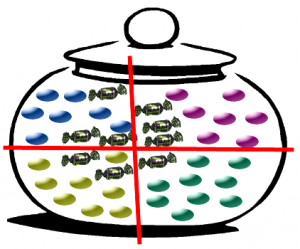 This covers 99% of the available tools. These tools are very easy to create and are, most of the time, only a small component into a larger “Operational CRM tool”. Some Example: Probance, Miner3D, Webtrends Segments,…

Each candy in the cookie-jar represents a know prospect. The big red cross represents our segmentation: we decided to create 4 segments based on our analysis of our population.

The objective of the exercise here is to create the best ranking: We want to select only the prospects that will buy our product. To create this ranking, we will analyze our population and we will pay a special attention to the people that already have the product (these costumers are represented with a Chokotoff label:

There are many different ways to define segments of your population. Segments can be defined:

In most of the time, the segments inside your population have been created ‘by a very smart guy a few years ago‘. In the above example, the criteria that was used to create the 4 segments is the position of the candy in the cookie-jar.

Here is an illustration of the ranking

The same ranking can also be illustrated in this way (the “Y” axis is now the cumulative number of buyers found):

The blue curve in the above chart is named the ‘Lift curve‘. The lift curve allows you to ‘see’ the quality of your ranking. Different ‘Analytical CRM tools’ will have different lift curves. The lift curve directly translates into ROI!

TIMi framework includes a unique tool that directly estimates, based on the lift curve, the ROI (in Euros or Dollars) of your marketing campaign. A good “Advanced Analytic” software will be able to directly find all the buyers and it will generate a “high lift curve”. The higher the lift curve, the better your ranking, the higher your ROI. 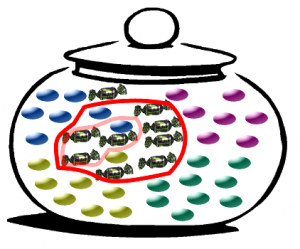 These tools are quite intricate to create and although they all deliver superior performances compared to simple “Segmentation tools”, the quality of the delivered results (quality of the ranking) varies greatly between them.

The large bold red circle represents our predictive model. The objective of this predictive model (in technical terms: the ‘target’) is to find all the people that have bought your product (i.e. the targets are the Chokotoff label:

This predictive model is making 4 errors:

The quality of the ranking obtained through predictive technique is visible on the lift curve:

Comparison of both techniques 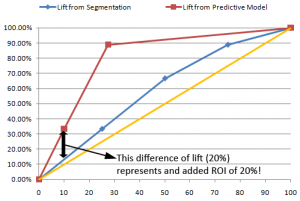 Lets now compare these 2 approaches in terms of ROI. By its very nature, segmentation is a technique well-adapted for exploratory work. In opposition, predictive analytics is discriminatory in nature.

Differences in results between the tools

Here are some lift curves (automatically generated with Timi) that illustrate the quality of different rankings:

The lifts obtained with Timi are systematically better (they are higher) than the lifts obtained with any other commercially available “Advanced Analytics” tool. This fact is demonstrated by our outstanding results at various datamining competitions and various industrial benchmarks. This means that, when you are using Timi, all your marketing campaigns will have substantially higher ROI (from 10% to 20% added ROI compared to another Predictive-Analytical-CRM-Tool (and from 300% to 500% more ROI compared to a segmentation-based-Analytical-CRM-tool).

These differences in ROI between the different “Predictive Analytics” tools are somewhat difficult to understand when you are used to other kind of software. Let’s take an example: If you run a SQL script on the same database using two different RDBMS engine (e.g. using an “Oracle” engine and using a “Teradata” engine), you’ll get exactly the same answser. The same is not true for “Predictive Analytics” tools: For example: Let’s assume that you used the exact same dataset to create a ranking with Timi, with SAS, with SPSS, with R, etc. Each “Predictive Analytic” tool gives you a different ranking (and thus a different ROI)(…Although we used the exact same data to create all these rankings!).